As we finish our first week in Berlin, our friendships are growing and the sass is as strong as ever (which is maybe too much at times). Several of us have commented that it feels like we have been here for weeks already (or I believe “years” was thrown around once). Yet, we have just made it to Friday with everyone still in one piece and with about ten new German words in our heads. Most of us are just now conquering jet lag, so getting to sleep in this morning was just what we needed. After a morning of rest, we headed to ReachOut.  ReachOut Berlin is a counseling and support center for victims of racial profiling, as well as right-wing and anti-Semitic violence. When we arrived, we were greeted by Biplab Basu, one of the founding members of ReachOut. He has been working with victims of migration asylum and racial bias since 1980. After we explained who we are and why we were there, Biplab described the work he and his colleagues do. He is clearly passionate about his work and the need to help those who are told they do not belong in Berlin. 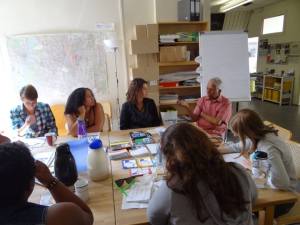 ReachOut is one of three programs under the larger organization ARIBA. ReachOut was the first of these programs and was founded in 2001. It is also the only program financed by the State, even though it is a NGO. This is very fortunate, because it allows ReachOut’s six employees to be paid, yet still offer free services to their clients. Five of the six employees at ReachOut are women, but they make a point to keep the racial and ethnic diversity at a balance of at least 50%. Hence, only three of the current employees are white Germans. ReachOut not only offers counseling to victims, but also provides assistance regarding how victims will proceed with their cases. ReachOut will help and follow their clients all the way through the legal process of filing a claim and taking it to court. They work with about 150 clients per year, which is only a very small percentage of those affected by racial discrimination. 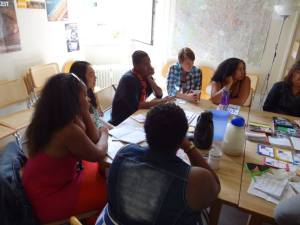 Biplab explained the tendency for victims to blame themselves or their bad timing on the days they are victimized. He also discussed the work he does to create a safe space for victims to share their stories, similar to Cassandra Ellerbe-Dück’s work we learned about yesterday. Victims do not need to justify their feelings or testimony nor do they have to tell every detail. The victims also have no obligation to do more than they feel comfortable with and the counselors will believe them no matter what.

Biplab also told us that most people do choose to take action against their perpetrator, even though 98% of their cases are dropped. Despite that, Biplab has no intention of backing down, as he feels his work is important to create change. He has been in this field for more than 30 years and because of this he has hope for the future. He has seen change, so he tries not to get too frustrated. He mentioned that he is seeing passionate young lawyers emerging, which will help make progress. He has also changed his method from focusing on changing the perpetrators to focusing on the victims and their experiences with racism.

A second organization under ARIBA that Biplab mentioned is KOP, which is for victims of racist police violence. One of the biggest issues this organization faces is the lack of awareness and public acknowledgment that racial violence and profiling is a problem. The police are supposed to be helpful and non-violent in their authority and that is exactly what many Germans believe. Yet, racial profiling is a serious issue that is being ignored. Unfortunately, people need to mobilize around their rights themselves because that is not always done for them. There is no funding for KOP, because the government and police departments have officially denied that this kind of racial profiling exists. Well, as Biplab said, they admit it is a problem…but only in the U.S. 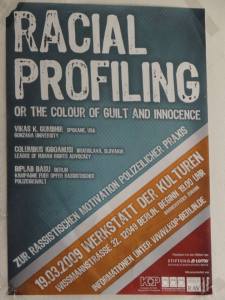 To us, this is especially ridiculous since we have created a whole class around the issue of being discriminated against because of your race. And this is in Germany in particular!  Unfortunately, it is absolutely an issue in the U.S as well, as with most of the world. As a white American, I have never come close to experiencing police violence myself, but I have certainly heard stories. Part of Biplab’s earlier frustration is that when he gave talks, he found that most people had never even heard of racial profiling and that they are skeptical, and sometimes he still has to start from scratch during those conversations. Hence, there is more funding for group violence, such as violence from Neo-Nazis.

Click the Picture to view a Link to the Trailer

As we have been learning in class, so many people become defined by their race, especially in a place such as Germany, where people of color are particularly visible if they are not white. It is important to bring the power back to those being defined and let them define themselves. As Toni Morrison wrote, and Heidi keeps repeating, “Definitions belong to the definers, not to the defined.” Just as Black Germans have begun identifying themselves by creating the word “Afro-German,” other ethnic minorities are fighting to feel comfortable and safe with their identity. Creating safe spaces, as Biplab and Cassandra encourage, is important for this progress.

Casey Schuller is entering her junior year at Colorado College. She is majoring in Sociology with a minor in Anthropology, and she is particularly interested in media and gender. She has been particularly challenged by this class, since for the first time in her life, she is being out-sassed by those around her.