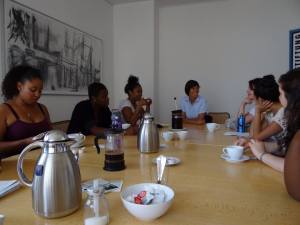 Our day started earlier than usual, which seems like it caused the morning to go a little longer than usual. While it was interesting seeing the hustle of Berlinerson a week day, I was a bit uncomfortable being so close to strangers and occasionally bumping intothem due to the harsh stops of the train. I guess it is just the southerner in me.

We arrived to the office of the Amadeu Antonio Stiftung where we were greeted with both coffee and tea which we were, the need for which was desperate. After everyone was situated, we went around the table and gave small introductions, which was followed by an introduction by Heike Radvan who has been working for the foundation for 14 years. She then gave us a brief introduction of the organization,and explained that it is named for Amadeu Antonio. Antonio was a contract worker who migrated to Berlin from Angola in 1980, and was, unfortunately, one of the first victims of Neo-Nazis. Antonio did not survive his brutal attack.

I was so excited to be able to talk to Heike about this organization, because I have been very interested in learning about the types of crimes that happen in Germany as compared to the U.S. I believe the reason why I was so interested in learning more about such information was because until our visit to the Foundation, many people I talked to described Berlin as a place that was way less violent than the U.S. I wanted to believe them, but it was hard for me to do that after learning about all the discrimination that happens here. So, I finally got the real scoop. Even though this particular organization has more of a focus on East Berlin, our discussion gave great insight on the somewhat hidden violence in the city and its rural areas.

Heike explained that the police in Berlin are often racist, especially in cases involving migrants. Sounds to me like how African-Americans are treated in the United States, which is why I decided to pose a question about how Heike thought Germany might have handled the Trayvon Martin case. I asked because the day before, we had dinner with students from Free University, and on our way back to our apartment, we were discussing gun laws in Germany and the States. One of the students explained that gun violence isn’t as prevalent in Germany because of the lengthy process it takes to get one. Then, she went on to say that because of these gun laws, the Trayvon Martin case would have happened very differently here. This was shocking because it gave me hope that such racist violence doesn’t happen everywhere in the world, but I still had my doubts. In response to my questions, Heike basically said that because of the racist police, Neo-Nazis, and discrimination against people of color here, the case would have more than likely had a very similar outcome. I was disappointed, but I wasn’t shocked at all.

Afterwards, Heike explained that Neo-Nazis train their children to be young Neo-Nazis, which creates problems in schools. We also had some discussion about how there are still parts of East Germany that have large populations of Neo-Nazis and that they often go unnoticed because they don’t always try to make their selves visible. This instantly reminded me of racist groups like the Ku Klux Klan (KKK) in southern parts of the U.S. Even though they might not always dress in their traditional white uniforms, they are still very active. I went on to ask Heike if there were “smaller” ways that Neo-Nazis tried to display their pride, much like the confederate flag for southern American racists. She informed us that even though the swastika is banned in Germany, Neo-Nazis still identify themselves with other signs, such as Celtic symbols.

All this information was eye-opening to me, because even though people describe Berlin as a really safe place, as Heidi says, “Here, I feel acutely Black.” This is also a challenge for me. Yet at the same time, I feel accutely Black at Colorado College, so the feeling is familiar. This conversation really made me think, “Is there a place where Trayvon Martin would have received justice?”

Kadesha is entering her third year at Colorado College, majoring in Feminist and Gender Studies and possibly minoring inRace and Ethnic Studies. She is also on the Pre-Medicine track.

2 thoughts on “Heike Radvan and the Amadeu Antonio Stiftung”