Tuesday afternoon started on a sleepy note, with most of us briefly returning to our beds before our meeting with Andrea Ottmer of the Deutsche Gesellschaft für Transidentität und Intersexualität (the German Society for Trans Identity and Intersexuality or DGTI). In 1998, Ottmer found this organization as a resource for trans* people who live in Berlin. Along these lines, she identifies two main problems that trans* people face in Germany. One of them being the difficulties one encounters in hospitals and courts, trying to change his/her identity. The other is the government’s refusal to acknowledge and enforce human rights for trans* people. Similar problems exist in the U.S., issues with insurance coverage, threat of bodily harm, and death. These problems, compounded with social issues of acceptance and empathy makes life for trans* people very difficult around the globe.

DGTI works to alleviate these problems, often collaborating with other organizations and NGOs, such as Les Migras, as Ottmer admitted it is hard for them to understand the cultural context of migrants and people of color who are trans*. Ottmer acknowledges that there has been an improvement for the trans* population of Germany but that there is still a lot of work to be done. She told us that trans* people can get jobs, housing, and education but that covert discrimination is always problematic. Gabi Zekina of Frauenkreise added that while these things are certainly progressive, much of the discussion about sexuality and identity ignores the experiences of thousands of people because these conversations do not account for the specific challenges of migrants, people of color, and people of a lower socioeconomic status. Gabi summed up her point nicely in saying, “The more oppressed you are, the more you must fight resistance.”

We also discussed how a part of that fight happens within women’s and feminist spaces. It is unfortunate when the very people who are fighting institutionalized discrimination are denigrating others for supposedly detracting from their cause. Ottmer knows from first-hand experience how people, women particularly, are very defensive about defining someone as “woman enough.” Along these lines, Janet Mock has publicly challenged this discourse about transwomen. In this way, public discussion often places too much emphasis on the intimate details about transformation without focusing on advocacy and eliminating transphobia and cissexism. Gender is often conflated with biology in order to denigrate transwoman (i.e. “You aren’t a real woman, because you don’t menstruate” or “You can’t have children, so you aren’t a woman.”) This kind of logic reduces women down to their body parts and restricts them to traditional gender roles. Another woman who joined our discussion commented that people in Germany seem to gain more cultural capital in transitioning from female to male than from male to female. This also happens in the U.S., because our society continues to devalue what it labels feminine.

This conversation has made me realize the benefits and rights that I take for granted simply because my gender and biological sex match. It was an informative conversation because these stories are rarely told on a larger scale, so it is crucial that Andrea Ottmer and her colleagues continue this work. 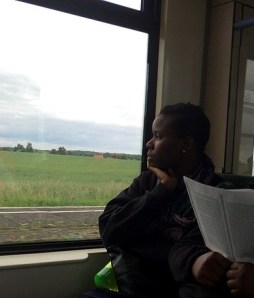 Kaimara is entering her third year at Colorado College, majoring in History with a minor in Feminist and Gender Studies. Kaimara is also a Middle Hitter on the CC women’s volleyball team.

2 thoughts on “German Society for Trans Identity and Intersexuality”