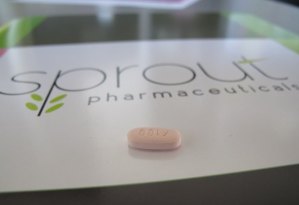 Over the past few years, Sprout Pharmaceuticals has been working to have a drug called flibanserin approved by the U.S. Food and Drug Administration (FDA).  Flibanserin is a female libido pill that was created in response to cases of dwindling sex drive in middle-aged females. The FDA has disapproved flibanserin on two occasions. Sandra Kweder, Deputy Director of the Office of New Drugs within the FDA, points to “the combination of […] not very robust effectiveness, and the fact that the safety profile has not really been characterized very well,” as reasons behind the disapproval.

Although the disapproval of this pill, according to the FDA is apolitical, women’s rights advocates, and the CEO of Sprout, Cindy Whitehead, disagree. The creation of this pill, Whitehead argues, is directly related to the need for female sexual liberation, autonomy, and control and the disapproval of this drug is a response to a sexist cultural norm surrounding female sexuality. “Men have a number of treatment options for sexual dysfunction,” Whitehead explains to NPR’s Rob Stein, “We haven’t yet gotten one for women’s dysfunction. Up until now, the treatment paradigm for women with sexual dysfunction has essentially been ‘let’s take a drug that works in men and see if it works in women.’” Whitehead’s points highlights a lack of female sexual autonomy and a failure to view women’s sexuality independently. This drug, she contends, will encourage women’s sexual agency and control, consequently shifting the narrative surrounding sexuality. Along these lines, Whitehead points out the fact that the lack of “sexual dysfunction” drugs designed specifically for women demonstrates female’s lack of sexual sovereignty. In Anne Koedt’s “The Myth of the Vaginal Orgasm,” she argues that “women have thus been defined sexually in terms of what pleases men; our own biology has not been properly analyzed” (196). The male-centric approach to female sexuality to which Koedt is referring is the very framework of Whitehead and many other women’s rights advocates arguments surrounding the implicit sexism the disapproval of flibanserin.

Many, such as Terry O’Neill, President of the National Organization for Women (NOW), think the FDA’s disapproval of flibanserin is a subconscious discomfort with female sexual autonomy and a result of culturally embedded ideas surrounding sexuality:

We live in a culture that has historically discounted the importance of sexual pleasure and sexual desire for women and I fear that it’s that cultural attitude: that men’s sexual health is extremely important but women’s sexual health is not so important, that’s the cultural attitude that I want to be sure that the FDA has not unconsciously imported into its deliberative process.

O’Neill, like others, is wary of the FDA’s gender bias and wonders if the disapproval of flibanserin is the result of our tendency as a culture to regard men’s sexual experience as the sexual experience, as universal, and applicable to women. Similarly, Carole S. Vance highlights the danger of subduing female sexuality in “Pleasure and Danger: Toward Politics of Sexuality.”  She writes, “If sexual desire is coded as male, women being to wonder if they are really ever sexual” (336). The need to study and understand female sexuality independent of male sexuality is also theme that is prevalent in Carol Gilligan’s “In a Different Voice: Psychological Theory and Women’s Development.” She writes, “The representation of the boy’s development as the single line of adolescent growth for both sexes creates a continual problem when it comes to interpreting the development of the girl” (325). Along these lines, Whitehead contends that “the FDA is holding flibanserin to a higher standard than it uses to evaluate drugs for men.” If true, it is frightening what this means in terms of a cultural fear of female sexual independence and expression and how the fear of female sexual liberation relates to gender oppression in general.

One thought on “What is Flibanserin?”