Why is it that Michael Brown, an 18 year old black man who stole a few packets of cigarettes, can be shot on the spot by a white policeman, but James Holmes, a young white male, can shoot an entire movie theatre and kill 12 people, yet still be able to go to trial? This is a question that ensued after an emotional and eye-opening discussion we had today with Nadine Saeed and Mouctar Bah, extremely passionate activists part of the Initiative in Memory of Oury Jalloh.

To start off our session, Nadine shared with us the story of Oury Jalloh. 10 years ago, three women cleaning the streets called the police because they claimed that a young black man named Oury Jalloh was “harassing” them. Though he was only asking to use one of their cellphones to call his girlfriend, the police showed up immediately, eager to arrest any person of color, especially a migrant. At 8:15 am, Jalloh was aggressively arrested and thrown into a police cell. Four hours later, he was chained to a bed and burned alive. The police claim Jalloh set himself on fire, and without any further investigation of the crime scene, this became the concrete story. But there was no possible way for this to be a suicide. For one, Jalloh was tightly cuffed by each arm and leg to the mattress which made any movement of his hands impossible. Secondly, the lighter “found at the crime scene” had no traces of fibers from Jalloh’s clothing or the mattress, and was not turned in as evidence until three days after the burning took place. And finally, the extent to which Jalloh was burned was only capable through the use of a combustive agent and the absence of the anti-flammable mattress cover. However, the courts didn’t care. Even with this evidence, they ruled Jalloh’s death a homicide, and only charged a 10,800€ fine to one police officer for not saving Jalloh when the fire alarm initially went off. They also charged the police chief for turning off the fire alarm despite his excuse that the fire alarm was broken. As this case continued to be appealed, video evidence disappeared and police stories kept changing, but the verdict stayed the same.

Hearing this story physically made my heart hurt, and it reminded me of the contemporary Black Lives Matter (also referred to as Black Life Matters) movement in the United States. The Brown vs. Ferguson case brought needed attention to this issue, but there are dozens of cases just like Brown’s. Take for example the story of Victor White. He was a young Black man who police claimed “shot himself in the head” in the back of a police car in Louisiana after being arrested for a crime he didn’t commit. Despite being handcuffed with no ability to move his hands, his death was ruled a suicide. There are countless other Black men and women who have similar stories, so I am very aware of racism in America. However, racism in Germany is brought to a whole different, unique level.

Not only are police able to get away with killing minorities here, but the secret service in Germany actually funds and organizes the National Socialist Underground, a racist and terrorist group associated with the KKK that has been killing innocent minorities for years. Racism is not only tolerated in this country, but is deeply rooted in every system of power. I am shocked. I am appalled. I am disgusted. As Maureen Maisha Eggers made clear in her article “Knowledges of (Un-) Belonging,” it’s difficult to even achieve a discussion of racism, let alone find a way to fight it and end it. Sandrine Micossé-Aikins, who we met with earlier today, echoes this idea in the introduction of The Little Book of Big Visions, a text she co-edited with Sharon Dodua Otoo (whom we’ll meet with next week). Micossé-Aikins told us that racism is so rarely talked about in Germany that people don’t even understand it exists, even though it is happening everywhere every day. She tightly links racism with nationalism—since the normative narrative is that Germans are white, so if you are not white, then you “can’t be German.”

The Initiative in Memory of Oury Jalloh has been investigating this case for years, with the hope of finally exposing the truth. They have worked with investigative journalists and have interviewed dozens of people connected to Jalloh and the police officers responsible for this crime. They have also made short films and held conferences to inform people of the situation. Ten years later and Oury Jalloh’s case is still being fought, and I can only hope that this time the courts bring him the justice he deserves. The Initiative is aware that the lawyers involved in Jalloh’s case aren’t activists and that they aren’t concerned about fighting for the truth, but rather doing what is best for them and their reputation. Nadine told us today that although she no longer has any belief in the judicial system, she believes it’s crucial for everyone to try to change the things they see going wrong in the world. Similarly, Philipp Khabo Köpsell gives hope to ending racism in “A Futurist’s Manifesto,” in which he writes, “This poem tells nothing about racism…. / In the future we rap about love / over beats made from smashing laptops against walls / rhythmically in sync with the tapping of / next door’s love birds. / In the future we love too much.” I can only hope that Koepsell’s vision comes true, but until then, the fight for justice and equality will continue. Oury Jalloh may be gone, but he is most certainly not forgotten. 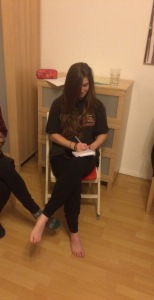 Samantha Gilbert is a sophomore who hails from Northern California and loves to be outside. From hiking to snowboarding to just breathing fresh air, nature really has her heart. She also really loves being active, as she runs track and field at CC as the team’s main female sprinter. She also writes for the sports section of The Catalyst, and is extremely passionate about journalism. She hopes to create her own major in Sports Psychology and double minor in Film & New Media Studies and Feminist & Gender Studies. Other hobbies of hers include watching The Food Network (specifically Chopped), going exploring with friends, and developing strong one on one connections with unique souls. Samantha loves traveling and learning, so this course has her super excited!

2 thoughts on “#BlackLivesMatter All over the World: Initiative in Memory of Oury Jalloh”