While reading Sharon Dodua Otoo’s the things I am thinking while smiling politely, I was intrigued by both the narrative and the style in which the author chose to write her unnamed African main character. First of all, my preconception of Germany as a mono-ethnic white absolute majority country was challenged. Here was a middle-class black woman in Berlin dealing with “middle-class problems” like her emotions about a broken marriage. This is an atypical written narrative about African migrants, who are often written into Western history as perpetual victims.

The narratives we often hear or read about regarding immigration and migrants in Western literature are ones about suffering and struggling to adjust to a new country that alienates them. Often, the immigration is either illegal or even involuntary, like in the cases of asylum-seekers. For instance, in “Voices in Exile” Asoka Esuruoso writes, “The old asylum seeker from Sierra Leon looked at me. Her face was wrinkled. Her jet-black wig perched precariously above her head was in the slow process of falling, ‘It’s the stress,’ she said” (165). A hyper-focus on narratives like Esuruoso’s, whilst true, have the potential to perpetuate unhealthy stereotypes that black people do not belong in Germany—that they are outsiders, encroaching in spaces that were not meant for them. Sharon’s narrative, then, challenges this kind of thinking in Germany. It reclaims the black narrative as its own, and portrays it as normal, human. It also echoes Phillipp Khabo Koepsell’s poem, “A Fanfare of the Colonized,” when he writes, “We [black people] can write this history…rewrite this damn story from the bottom to the top… reclaim what is mine and sound a fanfare for the colonized” (213).

As Sandrine Micossé-Aikins and Sharon point out, “black people are repeatedly reminded of, confronted with, and challenged by fantasies of white supremacy right up until the present day” (Micossé-Atkins and Otoo 9). In this way, Sharon’s work plays an important role in challenging this fantasy. It is, after all, what she describes as the literature she would have wanted to read growing up, and is now accessible to millions of black German women who now feel represented and situated firmly in German society. It is also the reason why her main character lacks a name. Sharon wanted every woman to be able to see herself in the main character, to relate to her problems, because they are truly universal and human.

We were all eager to meet Sharon and ask her our questions about her book. The anticipation leading to this moment could be seen in the excitement everyone showed when we learned that we all got to ask a question along with our introductions. Sharon briefed us on how her love for the German language led her to study the language, as well as her decision to move to Berlin from her childhood home in London. Her life’s story until this point resonated with the main character in her novella. Everyone was anxious to hear about how and if Sharon’s characters were informed by real life experiences, even possibly her own. But this led to us to a discussion on imagination and how authors of color are always expected to have recounted their lives in their produced works of literature, almost as if they are not allowed to have an imagination, like their white counter parts. It is the double standard that we, as students of intersectionality, found ourselves upholding and having to challenge. 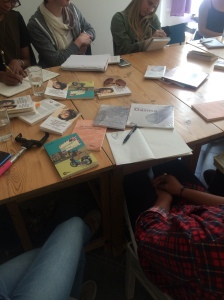 I found it interesting to point out that using People of Color (POC) to refer to people of the African diaspora is highly contentious in Germany, as it does not carry the same cultural and political history as it does in the United States. Sharon, through her work in activism, finds the term very broad and highly inclusive, making it unable to pinpoint and encompass the specific racial problems facing particular groups included under the umbrella term. For instance, we established that there were different racisms in Germany and that the lived experience of racism for one racial group might not necessarily be true for the other group.

We concluded by picking Sharon’s brain on her thoughts about racism in both London and Berlin. She smiled and said that English people are sometimes too concerned with being polite so that their racism is often passive. She prefers Berlin where everyone is blatant about their racism, because then she is more comfortable with honesty. 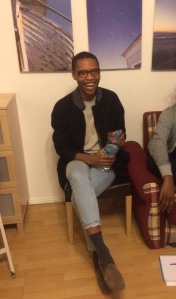 Thabiso Ratalane is a rising senior from the city of Maseru in the Southern African enclave of Lesotho. She dabbles in French and International Political Economy major divisions at Colorado College. Thabiso is passionate about fashion, linguistics, politics, writing, and social justice for minority groups around the world. Thabiso idolizes Anna Wintour; she finds her strong will, tenacity, efficiency, and passion for what she does admirable, and regards Wintour as a champion for female empowerment. Thabiso’s passion for minority groups and how they navigate social spaces that alienate them made this course and Berlin a perfect fit to spend her first month of the Summer.

5 thoughts on “I am not Your Idea of Me”