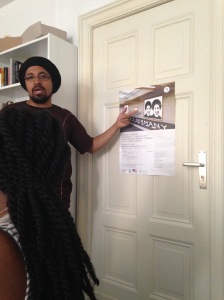 The sun shone bright as the hot pavement carried us to our next destination. We shuffled into a cozy room, as our Heidi and Aishah chatted with their colleagues. From my seat at Each One Teach One, I could peer around the corner into a quaint colorful library. The library houses books written by Black authors, functioning as a historical archive for Black people. The room in which we were sitting is also home to several afterschool events and learning opportunities for Black children and adults. When the chattering settled, our teacher for this afternoon—Joshua Kwesi Aikins—stepped forward. 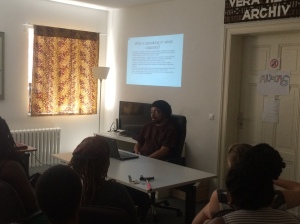 Aikins is an academic and political activist who has been active in the Afro-German movement, such as Initiative Schwarze Menschen in Deutschland (Initiative of Black People in Germany), for the last 15 years. His roots lie in Ghana, thus he does activist work in Ghana, as well. Eloquently, he illustrated the inner workings of his political activist framework by emphasizing that theoretical reflection—which yields epistemic, analytical, and political benefits—can be an effective methodology for this kind of activism. His emphasis on epistemology reminded me of Maisha Eggers’ “Knowledges of (Un) Belonging: Epistemic Change as a Defining Mode for Black Women’s Activism in Germany.” In this article, Eggers tracks the ways in which Black women in Germany have used their own production of knowledge to dismantle the present “racialized knowledge.” As a result, epistemic change has facilitated social and political change inside and outside of the Black empowerment movement. Along these lines, Aikins and the activists alongside him have been lobbying the United Nations (UN) to make use of the Committee on the Elimination of Racial Discrimination (CERD), and they have had some success. Aikins has presented his collaborative findings on discrimination of all types (e.g., LGBTQI of color, Turkish, Jewish, Blacks) to the UN, and they have decided to put pressure on the German government to make legislative change. 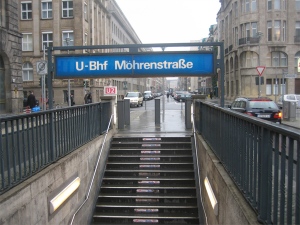 After giving us an introduction to his work, Aikins parsed out the specifics of the postcolonial structures that Germany retains. First, he defined the word coloniality as the notion that colonialism is embedded in our current society, noting that our societal structures cannot be boiled down to only colonialism. According to him, there are five symptoms of coloniality: Coloniality of Power, Coloniality of Knowledge, Coloniality of Being, Power of Ignorance, and Ignorance of Power. Of these five, the Coloniality of Knowledge is the most interesting to me. This, in Aikins’ words, is simply the hegemonic knowledge of the “dead men of five countries.” In other words, our body of knowledge has been created and established by white males from five main western countries. The Coloniality of Knowledge erases the fullness of history and strips marginalized people of writing their own stories. Philipp Khabo Köpsell echoes these sentiments in his poem “A Fanfare for the Colonized.” He writes, “O they will tell you of tradition/ of the mapping of the world/ of the mapping of your minds,” and then colonizers will deny the consequences of their actions. Köpsell goes on to write, “Is this what it is? Like this?/ We can’t read the script? Like this?/ We don’t write our own stories?/ We can’t navigate in landscapes/ where the white men claim of glory?/ Motherfuckers we have maps too!” Both Aikins and Köpsell emphasize the eradication of the Black narrative from colonial history that still occurs today.

Along these lines, Kwesi told us that Germany denies conducting genocide in Namibia to this day. Although it is technically the first genocide of the 20th century, people frequently overlook it. This denial seems oxymoronic when there are still street signs and subway stations with derogatory names targeted at black people that clearly signify Germany’s colonial past. For example, Mohrenstraße is a street name that still exists. Mohren’s latin root means “dark,” but it also means “stupid” and “heathen.” This word has been historically used to degrade Black people in order to uphold white supremacist power structures, and its usage in a public space is a constant reminder of German colonialism. In response, Aikins has worked with Berlin Postkolonial and the ISD has begun to change the names of street signs to those of historical Black figures. The first sign to be created was in commemoration of May Ayim. The prior street name, Gröbenufer, commemorated a white male colonialist, Otto Friedrich von der Gröben, who theorized the racist notion of colorism. When May Ayim’s new sign was installed, there was also a plaque installed that explains the history of the sign. Aikins notes that the point is not to erase history, but rather to document it from all perspectives. 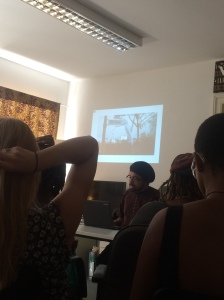 Aikins concluded his lesson with a final articulation—we have the ability to make positive change. If we realize that history is layered with similar and distinct connections, we can track the transcendence of oppression through time. By doing this, we have identified the structural oppression at hand. This is the kind of oppression that is not only institutional and individual, but is also a layer of oppression that is socially shared, sustained, and reproduced through everyday culture, education, and media. However, I was confused as to how could we track our history as Black people when it is constantly being erased. Aikins responded explaining that although it is hard to piece together our history, it is becoming easier. More importantly, we can track our history through the ways we’ve resisted. This reminded me of the ways that the gay and lesbian communities remembered the Holocaust. For instance, in “The Pink Triangle and Political Consciousness: Gays, Lesbians, and the Memory of Nazi Persecution,”  describes this fragmented collective memory—gays and lesbians were so marginalized and traumatized from the events of the Holocaust that they were hard to discuss and remember. However, they were able to find a collective memory by wearing the Pink Triangle to resist the oppression they were facin. It seems that Aikins is prompting us to do the same, so as to rewrite history by filling in the erasures with the people, places, and experiences that we do have access to, which can even be in our own backyard. 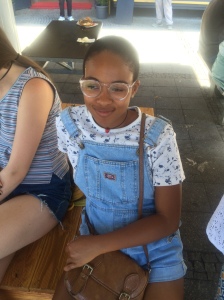 Nia Abram is a rising junior, an Environmental Science major, and an avid dancer at Colorado College. She has lived in central New Jersey, Atlanta, California, and northern Jersey (in that order), but in the end, she calls north Jersey her home. Nia enjoys hiking and creative writing, as she often retreats to nature to write short stories and personal essays in her free time. Some of her favorite movies include Coming to America, Scott Pilgrim vs. the World, Mulan, Howl’s Moving Castle, and, of course, Harry Potter. She has taken an interest in Feminist & Gender Studies, and may have the opportunity to declare a minor. However, she hopes to use her knowledge as a feminist and an academic to address environmental justice issues through an intersectional lens. Optimistically, her future career will allow her to start a non-profit organization that brings environmental science and outdoor education to underprivileged urban girls through a program that teaches science, empowerment, and social justice.

3 thoughts on “Dismantling Structural Racism: Kwesi Aikins on Politics in a Postcolonial Society”