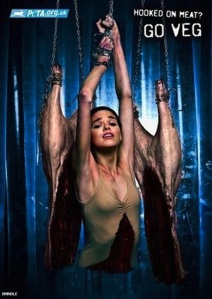 “In recent advertisements, People for the Ethical Treatment of Animals (PETA) has released intensely grotesque images of women, hoping to stop animal cruelty. In the process of dehumanizing female figures in their ads, PETA contributes to the normalized misogyny of image-based advertising, and thereby fails to fulfill a humane approach to animal rights. By examining PETA’s advertisements through an ecofeminist lens, we show how the organization contradicts their own claim that animals deserve to be treated with respect, by implying that women do not deserve the same.”
—Katie Lawrie, Lauren Milliet, Anna Wermuth, and Willis Zetter (Block 4 2016)

“The severing of the female body in the print ad corresponds to what Jane Caputi calls ‘symbolic dismemberment’ in ‘The Pornography of Everyday Life.’ In this case, the dismemberment is more literal than symbolic: it plays on the “male sexual objectification, and possession unto death of both women and the Earth’s substances” (Caputi 379). The symbolic aim of the advertisement appears misguided and confused—while it associates the harm and mutilation of non-human animals with images of an abused and dismembered female body, it does so in a way that aims to shock and arouse the (presumably male) viewer rather than educate him.”

“To suggest that these women enjoy more pleasurable sexual encounters is one thing, but to source that pleasure from vegetarianism and the use of vegetables as sexual objects is another. Ultimately, the commercial fails to communicate anything legitimate about the relevant environmental benefits of a vegetarian diet. It only perpetuates hegemonic standards of sexuality, and emphasizes the marketability of the sexy female body. In doing so, PETA degrades women to a commodified status like that of animals, and thereby effectively dehumanizes them.”

“Resisting PETA in the actual sphere of advertising might look like an ecofeminist-minded organization which campaigns for animal rights in a more just manner; therefore, we attempted to conceptualize such an entity. Even the abbreviation for our organization’s name, EFFWAR, is an allusion to anti-war and anti-violence principles adopted by feminists all over the world, and is a way for us to articulate a rejection of the problematic violence seen in PETA’s advertising.”

“In today’s culture, advertising companies feed off the new and rising consumerism, or an undeniable need to ‘keep up.’ Due to this social comparison and manifestation in the bigger, better, and faster products, advertising companies prey on the ethos of viewers instead of logos. Therefore, our new company targets the critical thinking of viewers by using a helpful and informational narrative to stand out in an advertising world dominated usually by the objectification of women in flashy, sped up images.”