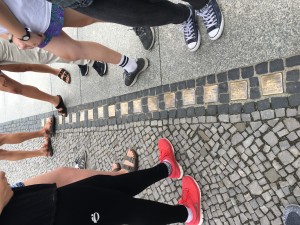 This morning we had the opportunity to explore some of the hidden histories of Berlin with a woman named Carolyn Gammon took us on a walking tour about Jewish history throughout East Berlin, and opened our eyes to why the waiter at the restaurant taking our order seems to have a bit of resentment for us. We’re people whose President wants to build a wall. A wall that will divide families and fulfill greed for power driven by hatred and discrimination. Of course, what is becoming our reality existed for the Germans generations ago. And they are still feeling that guilt and recovering from that hate. Over seventy years after the Holocaust ended, recently built Jewish museums and memorials ensure that it is something the Germans will never forget.

Along these lines, one of the first things Carolyn pointed out to us while walking were little brass plaques in the ground, each representing a German Jew that was murdered during the Holocaust. Carolyn informed us that these small squares were usually placed in front of the house where the individual lived as a ritual of commemoration. Along these lines, in “Sites of Remembrance? Jewish Museums in Contemporary Germany,” Sabine Offe suggests that these memorials were placed because of the guilty feelings passed down through the generations. People are told they can shine these plaques with their shoes as a sign of respect so that the brass does not turn brown and the names of the deceased can still be clearly read. These memorials lie throughout most of the city.

Next, Carolyn took us across the street to the Burning Book memorial. It is a piece of glass that covers a hole in the ground. When you stand to the side, you see bookshelves that have enough space to hold the 20,000 books that were burned. When you stand on top of the memorial, you can only see the reflection of yourself. I viewed this memorial as a warning to future generations to really take a look at who we are and the destruction we have the ability to cause. Next to the glass lies a plaque was a quote from Heinrich Heine, which translates to “if you start burning books, you will end up burning people.” It’s far too reminiscent of the books being banned in the U.S. and the textbooks riddled with creationist ideas that teach young teens that abstinence is the only form of sex education. Religious and political censorship leave children uncertain of their past or their future. I can’t help but think the fundamentalist right is well on its way to burning the people of the U.S.

This extreme religious intolerance is what led us to the most humbling part of our tour: a Jewish cemetery torn down by Nazis with only a few salvaged tombstones remaining. When the Nazis occupied East Berlin, they saw to it that every synagogue was burned and every cemetery destroyed. We learned that in Germany, the term Nazi is not used because it is too short and “sweet.” Germans only refer to them as National Socialists, because the German word is extensive and has a connotation of disgust. The cemetery sits on a street that was referred to as Tolerance Street before the Nazis occupied the area, because of the open dialogue and shared space between the Jewish and Protestant communities. When the Nazis invaded, the street became known as Death Street. Carolyn made it very clear that the plaques located at the cemetery use strong language in German, because referring to the deaths as killings instead of murders would be doing an injustice to the Jews whose lives were lost. Since the community has come back together, it has regained its original name. Under Nazi rule, communities were forced to come together against anti-Semitic groups. Along these lines, in “We Don’t Want to Be The Jews of Tomorrow: Jews and Turks in Germany after 9/11,” Gökçe Yurdakul and Y. Michal Bodemann examine the Turkish and migrant groups that helped lead initiatives against anti-Semitism and demonstrated to show their solidarity with Jewish Germans against Nazi terrorism. Similarly, the people of East Berlin who called that community home refused to stand for the intolerance and instead chose solidarity.

Just down the street from the cemetery is a school founded by and named for Jewish German philosopher Moses Mendelssohn who strongly believed in religious tolerance and had a dream to create a school where Jews and non-Jewish students could study together and learn from each other. The school, established in 1778 and reopened in 1993, currently enrolls students of all religions. Those from non-Jewish backgrounds take Hebrew and Judaic studies, learning from a young age what it means to be open-minded and accepting of a community different from your own.

As a religion major with the goal of a career as either a prison or military chaplain, there is really nothing I “geek out” about more than churches and religious places of worship. I was glad, then, when our tour took us to a Protestant church that was one of the only remaining buildings from medieval Berlin. Inside the church there is a donation box for an initiative between the Jewish, Islamic, and Protestant communities in Berlin. The initiative is called House of One, and they are raising money to build a religious center that can hold services in all denominations—a great opportunity for people who seek a shared community of multiple religious belonging. I think faith is one of the most interesting things about humanity, because people build shrines and monuments in honor of gods they believe will bring them salvation or peace in this life. I was raised Unitarian Universalist, a liberal faith denomination that does not have a specific dogma but instead is committed to building community and ministry around issues of social justice. While I identify as agnostic, I believe a person’s beliefs, religious and otherwise, tell you most everything you need to know about a person. It is only when religion is misused and becomes combative that a strong sense of religious belonging brings destruction instead of beauty.

On that note, I was intrigued to learn that on September 13, 1964, Martin Luther King, Jr. spoke to the congregation on Tolerance Street in East Berlin. That day he preached: “No man-made barrier can erase the fact that God’s children lie on both sides of the wall.” I don’t know if I believe in MLK’s God, but I do believe in his sentiments. The 7th and last principle my faith is based on discusses the significance of the interdependent web of life. We are not all the same, and we most certainly do not have the same religious beliefs. But we are all human. Trump’s ideas to build a wall between the U.S. and Mexico and his attempted ban on Muslims are blatantly racist. As Carolyn told us, German Chancellor Angela Merkel recently opened Germany’s doors to one million refugees—an economically advantageous choice that Trump was quick to call a catastrophic mistake. Along these lines, in “Troubling Categories I Can’t Think Without: Reflections on Women In The Holocaust,” R. Ruth Linden writes: “It seems to me that the history of the Holocaust, like all of history, is a collection of stories […] the stories we write, tell, or paint about Holocaust victims and survivors, and the plots we give these stories are mirrors of our own era.” As students, we learn about history so that we don’t make the same mistakes, but Linden’s words point out the problem with America: we don’t pay attention to the mistakes of others. It is going to take a lot of work and admission of guilt to mend America’s mistake, and if one thing is certain, there will always be work to do. At least for the time being, I’m happy to be in a country that can actually call itself a democracy.

Olivia Calvi is a rising sophomore from Los Angeles, CA. She is double-majoring in Religion and Classics at Colorado College, and hopes to also attain a Feminist & Gender Studies minor. After college she plans on attending Seminary to eventually find herself in a career as a military or prison chaplain. She wholeheartedly believes in the Denver Airport conspiracy theory and has recently made the discovery that she is terrible at navigating public transportation.

7 thoughts on “Taking Down The Wall of Religious Intolerance: Jewish History in Berlin”