It would feel more realistic to say that it was six months ago that I stepped off the plane to find myself in Germany’s capital; as I blog, however, it has been 21 days. The experiences I have shared with my peers in this short amount of time will remain pertinent and influential in my memory for years to come. As bittersweet as it is to already be leaving, I think it is safe to say that the FemGeniuses are experiencing stimulus overload, exhaustion, and maybe even a touch of homesickness. Nevertheless, our final day in Berlin was brimming with adventure, laughter, and reflection.

Despite the weather forecast, we woke up surprised to find gloomy skies followed by bursts of rain. The apartment was buzzing with nostalgia and delight, and after we said our first goodbye to Blaise, several of us headed to Hackescher Markt to seek out some last-minute Berlin memorabilia, perhaps for our family members whom we promised souvenirs or maybe as a last-ditch effort to spend the rest of our “monopoly money” euros. The tourist atmosphere was stifling, and after a while, we headed to BBQ Kitchen to grab some lunch, minus Casey, who was determined to find schnitzel before she left Germany. With our stomachs full, we easily traversed the bustling cobblestone streets and navigated various forms of public transport. We’ve come a long way since first arriving in Berlin with wide eyes and frantic expressions (at least I have).

Our main attraction for the day, the Lesbian and Gay Festival, was 13 U-Bahn stops from “home.” The streets there were colored with lesbian and gay pride, the air boisterous with affirmation and eccentricity. The product of small town Colorado, I could count on one hand the number of LGBTQ people I knew and had met while growing up. During my time in Berlin, however, I have seen more couples and met more LGBTQ activists than I’ve known in my brief 18 year existence. Nollendorfplatz brought more immediate comfort and relief than I was expecting. Before the rain started again, our group navigated the colorful streets in childlike awe and happiness, collecting brochures, stickers, and buttons—text in English not required. We all wished, however, that we had at least a basic knowledge of German language in order to enjoy a drag queen’s stage performance or read informational pamphlets of various activist groups. For me, the experience was valuable even without total linguistic comprehension. Although it soon began pouring, the weather couldn’t rain on the parade—there were enough rainbows around to keep the people smiling.

On the train that afternoon (after we left the festival) and again that evening (after we returned to check out the night scene), I exchanged social discomforts with other passengers. Kadesha told me about the rude commentary of a couple, which included the German term for lesbian, “lesbisch,” followed by laughter. And later, I was pressed to boldly stare back at an ill-mannered man whose eyes couldn’t seem to be separated from my new Amnesty International t-shirt and short hair. Throughout the trip, I had heard from several of my classmates that they felt particularly Black in Germany, and before these incidents, I hadn’t fully understood what they meant, since my whiteness, at least, helped me blend in. Discrimination and loathing isn’t always overt, and I find this to be a dangerous issue. When those with the “normative” privileges can instill discomfort in the “other” without laying claim to its problematic subtleties, oppressions scoot under the radar, beyond basic discourse and action. That’s why I find the experiences we had in Berlin with activists and authors who are at the front of various socio-political movements so significant. Where awareness is lacking, intersectionality and kindness suffer.

Our late afternoon and early evening was peppered with unique experiences as well. In the lively Alexanderplatz station square, we found ourselves in the midst of another cultural event, the Afrika Festival. We instantly wished we had come here in place of our visit to the Hackescher market, but that didn’t stop us from purchasing several hand-crafted, distinctive products from the kind vendors. In our interaction with an eager salesman and musician, Kadesha managed to acquire two free hand-carved creatures, an elephant and a hippopotamus she promptly named “Hippa.”

A short walk away, we found ourselves craning our necks in order to see the tip of the TV Tower. We entered Berlin in style with our meal at 368 meters (1,207 feet), and our exit was no different. Our accommodations the entire trip never failed to disappoint. 147 floors above the ground, we ate a three-course meal on a revolving floor that allowed us an exquisite 360-degree view of Berlin. Together, we shared tasty delicacies and laughable memories from the trip. Although we all came from different places, including Peru, Turkey, Malaysia, and the United States, we were collectively one unit from Colorado College. We embarked on an adventure with an esteemed professor who helped introduce us to the revolutionary activism in Germany surrounding race, gender, sexuality, class, and migration. Each of us left with some new perspectives, whether on an international or personal level, and for that, I feel eternally blessed. As a child, when I dreamt about travel, I never imagined it occurring so soon in my life or that I would also be meeting and conversing with the authors of the books I studied for this course, the front-runners of a historical movement. Now, as we enter the air to go back from whence we came, we have new knowledge in our minds and new outlooks in our hearts. 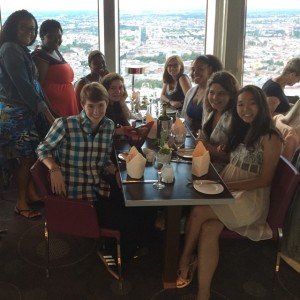 Stefani Messick is a rising sophomore at Colorado College and hopes to major in English and Education. She also runs for the cross country and track and field teams, and has been finding time to run laps around the block near the apartment where she lives in Berlin, rain or shine. She prefers shine.