Today I woke up very excited that we were going to meet Ika Hügel-Marshall, one remarkable and admirable woman and the author of the autobiography Invisible Woman: Growing Up Black in Germany, which the FemGeniuses are studying for our course. Born of an African-American soldier and a white German mother in 1947, Ika had to endure physical and psychological alienation because of being “different,”specifically because she is a non-white German. Ika faced prejudices and stereotypes from her childhood into her adult years. She is currently a teacher of gender studies and psychological counseling, focusing on intercultural teams and bi-national couples, and she has a degree in social pedagogics, publishing works that raise consciousness against racism.

For about two hours at Frauenkreise, we were given the honour of asking Ika questions that we had formulated together as a class the day before about her life, her book and Afro-German communities. During the session, Casey, another FemGeniuses, would ask the questions in English which were then translated to German by activist, author, and filmmaker Dagmar Schultz for Ika to answer. Ria Cheatom, Co-founder of ADEFRA and script Co-Author for Audre Lorde: The Berlin Years, 1984-1992, was also in the room. She and Dagmar also contributed to the discussion. At first, it felt unreal for me to be in front of Ika, the person I had read a life story about, which included the struggles she had to endure as well as her achievements. She had become an icon for me, a representation of strength and an example of how people can accept and come to ease with their identity even though they have been rejected and bullied by society because of it. Her bravery is very symbolic and inspirational, thus it meant a lot to me to be able to have this opportunity.

One of the responses by Ika that I will always be able to recall was about her relationship with her family in Chicago. She mentioned that she was very happy to find her father and her big family in the U.S., an event many Afro-Germans could only dream of. She mentioned how she could just be Ika in Chicago around her family without having to worry about stereotypes or being judged. She told us how she and her family would grill, dance and sing without any worries. At the beginning, she found this very impressive because those stereotypes that people spoke about in Germany, such as the idea that all Blacks like to sing and dance, her family in the U.S. was embracing without being solely defined by them. This reminds me of a passage in Invisible Woman when Ika writes, “In the eyes of my teachers, everything I do-especially the difficulties I have in school, but also my successes, achievements, and all that I’m proud of – is a function of the colour of my skin.” During our discussion, she also told us that visiting her family “strengthened her” as a Black person, “healed her,” and “allowed her to deal with racism” in a different and healthier way. She had finally came with ease with her identity, and she said that although she felt comfortable being Black, she also felt comfortable feeling German.

This response relates to another question we asked regarding how her relationship with and responses to racism changed over the years. When answering this question, Ika mentioned that she had become more calmed and relaxed about the issue of racism and that “it is more important to face things than to take distance and try to ignore them.” She is now willing to accept other perspectives and contributions to conversations about racism, and she is able to respect these views, especially if they are coming from the minds of white people, whom she used to mistrust and avoid due to her anger.

When listening to Ika, one of the things that impressed me the most about her was the confidence with which she would answer all of our questions and her soft but energetic way of expressing herself. It was a great honour to meet her in person and be able to hear from her all those experiences that made her strong and make her an inspiration for other Afro-Germans. Although this blog is just a small taste of our talk, it is a demonstration of the kind of issues we discussed and the kind of role model she is. Thus, I encourage everybody reading this blog to look her up and learn more about her amazing life. For us, this was certainly an experience that we will cherish and that has inspired us to make a difference in the world as the strong-minded Femgeniuses we are!

Ximena an international student at Colorado College. She is from Peru, and will be a sophomore this coming year. She is currently undeclared, but debating between majoring in Anthropology or Sociology. She is very excited to be in Berlin taking a course with Heidi and through CC, because it has so far allowed for a unique learning experience.

Although this is not my first time traveling outside of the country, it has been my first opportunity to study abroad, and so far, Berlin has been an amazing experience. Today was a wet and gloomy day, but we were still able to interact with communities in Berlin that are usually kept under the radar.

We started off our day with a visit from Ika Hügel-Marshall, author of Invisible Woman: Growing up Black in Germany at Frauenkreise, in order to ask questions and discuss topics related to her being a doubly ostracized citizen of Germany as both an Afro-German woman and a lesbian. It was also a pleasure to have Ika’s partner Dagmar Schultz there to translate for us. It was refreshing to speak with someone who hasplayed a major role in the Afro-German movement in Berlin. 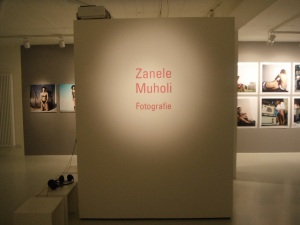 After that, we went back to our apartments to get a little rest and then headed to our next adventure. Aside from the language barrier, it is relatively easy to navigate the streets and public transportation systems in Berlin. Thank goodness for Google maps; although, I could have survived without the obvious stares. Out next destination was the Schwules Museum.  Even though we had to trudge through some unpleasant weather, I was super excited to finally get to the museum, especially since I have never had the pleasures of visiting one like it in the States. Once we arrived, we were greeted by the very excited and sweet Elisaveta Dvorakk who gave us a tour of the photography activist Zanele Muholi’s exhibit. Not only does Muholi’s art celebrate various forms of the Black woman’s body, it is simultaneously celebrating Black lesbians through her photography. 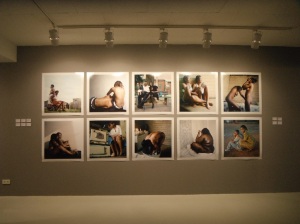 The exhibit was all the way in the back, but they say you save the best for last, which was very true in this case. We were given a little time to look around at her photographs on our own in order to get a feel for the exhibit before Elisaveta gave us an explanation of the pieces on display. The exhibit was a collection of series, including Faces and Phases and Being, which went perfectly together in giving insighton the complexities of Black queer communities. These photos were not only eye-opening because of the content, which was at times very up close and personal, but they were also eye-catching because of Muholi’s style of photography.

What I noticed about the majority of the pieces from Faces and Phases was that all of the people were centered, making it impossible to not be captured by their gazes. For me, it was a way of forcing viewers to humanize Black lesbians because they look at them directly instead of only glancing at them from a side view. Being, much like Faces and Phases, showcased pieces that humanized Black lesbians by capturing their everyday life processes, such as being in a relationship, bathing, having families with children, and a range of other aspects.

After viewing her exhibit, we viewed a relatively short documentary starring Muholi entitled Difficult Love. The documentary featured discussions about the views of homosexuality in Johannesburg, where Muholi’s photography was banned because of its potential to “poison the youth.” An interesting comment was that homosexuality was not original to Africa, but was brought to the continent by Europeans. I found this especially interesting, because I remember southerners in Little Rock, Arkansas, where I’m from, claiming that homosexuality is “a white man’s disease.” Throughout the documentary, there were also multiple accounts about homosexuals being exiled and abused physically and mentally. What was disturbing was that many of the stories were very similar to those that are told in the U.S. I guess it was more upsetting to come to the realization that there is truly no escape from discrimination anywhere in the world.

I started to become very emotional during the exhibit and documentary, partially because of the gloomy weather outside but mainly because of these human beings being treated as animals that need to be shot down because of the potential of them spreading a “disease.” Yet, these people fail to realize that they are contributing to spreading the rampantdisease of homophobia.

Never the less, I was more than happy to be able to go to such a unique museum and experience such a unique and eye-opening exhibit. I can’t wait for more adventures here in Berlin.

Kadesha is entering her third year at Colorado College, majoring in Feminist and Gender Studies and possibly minoring in Race and Ethnic Studies. She is also on the Pre-Medicine track.