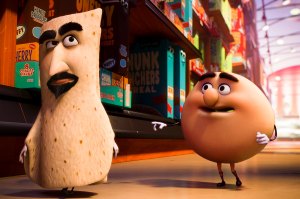 By Maitreyi A. Menon

Sausage Party capitalized on the humor of stereotypes, and some critics hailed the movie for “making fun of everybody.” However, the damages of these supposedly equal actions are definitely not equal. As such, I shall examine the pantomime of the Israeli-Palestinian conflict that was created by the characterization of the Bagel and the Lavash through a transnational feminist lens. Bagel was armored with racial stereotypes of Jews, particularly his nature of always whining or complaining and having a noticeably large nose. Lavash, too, met us with an exaggerated accent, thick, bushy eyebrows, a supposedly iconic beard, an obsession with “extra-virgin” olive oil, and über-conservative, oppressive values about women. The primary source of their mutual hatred stemmed from having to “share the isle” – an obvious allusion to the Israeli-Palestinian conflict. The conflict itself is extremely complex, however, and any attempts to simplify it will render it inaccurate. As Aili Mari Tripp argues in “Challenges in Transnational Feminist Mobilization,” “When outsiders do not take the time to learn about or attend to the particulars of a situation, their efforts can backfire” (107). When Frank the sausage tells Bagel and Lavash that he can’t understand their dispute because the isle seems big enough for the both of them, audiences are intended find humor in such a simple idea not occurring to them earlier, whereas the real humor lies in these audiences often failing to understand how these conflict came about, as well as their crucial involvement in it.

When the U.N. (arguably orchestrated by the U.S. and other Western superpowers) decided to intervene and “save” by diving up the land, a majority of the land went to the Jews, despite being the under-represented population. Since Sausage Party caters largely to American and other English-speaking audiences, a space rampant with Islamophobia, it is more damaging to Palestine by offering a space to legitimize their occupation and oppression. The stereotype of the oppressive Muslim Palestinian (Lavash) only re-emphasized existing essentialisms such as oppression of women by Muslim men, which serves to legitimize the detrimental interventions of the US or others. As Lila Abu-Lughod writes in “The Muslim Woman: The Power of Images and the Danger of Pity,” “One of the most dangerous functions of these [stereotypical] images of Middle Eastern or Muslim women is to enable many of us to imagine that these women need rescuing by us or by our governments” (50). Moreover, the U.S. has funded Israel more than any other country in the world, a tool very important in Israel’s violent repression of the Palestinians. As Judith Lorber claims in Gender Inequality: Feminist Theories and Politics, so-called western ideals “are also the source of universal human rights, which can be used to fight subordinating cultural practices” (113). These rights are very often not universal and are also tailored to fit individualistic societies; hence, they too provide a justification for Western powers to intervene to suit their benefit. Hence, the portrayal of an over-simplified fight over the isle fails to take into consideration the involvement of many other factors of the source of conflict and the role other parties (such as the US) had to play in it.

NOTE: This essay was written by a First-Year Experience (FYE) student in FG110 Introduction to Feminist & Gender Studies taught by Professor Heidi R. Lewis. FG110 teaches students how to examine power, inequality, and privilege along the lines of gender, sexuality, race, socioeconomic status, age, physicality, and other social, cultural, and political markers using multi-, inter-, and transdisciplinary approaches. Near the end of the block, the students visited a local theater to screen Sausage Party, and this essay was written in response. 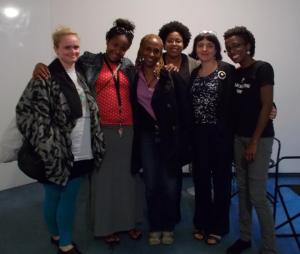 On Friday, June 13, I presented “Racialized Representations of Women in U.S. Media” at Frauenkreise in Berlin at the invitation of Project Manager Gabi Zekina. Below, you will find a written version of the introduction to my analysis. Click here to view the complete PowerPoint presentation, and click here to listen to the audio (approximately 90 minutes) recorded by Cassandra Ellerbe-Dück. I would also like to thank Vicky Germain for also recording the event and for suggesting that I post it to the web for you all to listen to and engage.

Before I begin the analytical discussion, I want to spend about 10 minutes introducing myself and my work to you. As you know, my name is Heidi R. Lewis, and I’m an Assistant Professor in the Feminist & Gender Studies Program at Colorado College, where I also serve as a core faculty member in the Race & Ethnic Studies Program. My teaching and research interests include Black Feminist Theory, Transnational Feminisms, and Critical Studies of media and popular culture, feminism, race, whiteness, and hip hop. I’m also an Associate Editor for The Feminist Wire, a peer-reviewed online publication that provides sociopolitical and cultural critiques of anti-feminist, racist, and imperialist politics pervasive in all forms and spaces of private and public lives. 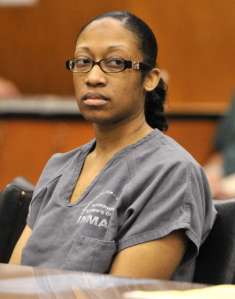 Regarding my own career, I have begun to situate myself as a theoretical activist, because often, especially within “liberal” and “progressive” communities in the United States, I hear people denigrate theory in an effort to communicate the necessity of action. For instance, sometimes my audiences, including my students, grow frustrated when they ask about what they can “do” to affect change, and I respond that theorizing is one of the most important things that can be done in response to injustice. I respond in this way, because for me, theory is simply a way of thinking about, understanding, and explaining the world. How many of you are familiar with the Marissa Alexander case in the United States? It’s my contention that a theory sentenced Marissa Alexander to 20 years for self-defense. Of course, the racist legal system, including police, attorneys, the jury, and the judge, sentenced Marissa Alexander. However, this sentencing would not have been possible without racist and sexist theories about Black women’s bodies and lives, theories that suggest that our bodies are not worthy of love, affection, and protection, theories that suggest that our lives don’t matter and that they’re not worth saving. Only racist and sexist thinking would allow someone to see Marissa Alexander as anything other than a victim.

At this point, then, I’d like to clarify the theoretical framework of my work on U.S. media, a framework situated at the nexus of cultural studies, critical media studies, and feminist studies. As Paula Saukko points out, “The trademark of the cultural studies has been an interest in the interplay between lived experience, texts or discourses, and the social context,” which relies heavily on an investment in multiple validities. Saukko points out that this draws attention to the fact that the theories, methods and modes of analysis that underpin our research open up different and always partial and political views on reality. Multiple validities ask us to be more critically aware of what drives our research. Additionally, acknowledging that there is more than one way of making sense of social phenomena asks us to come up with a more multidimensional, nuanced, and tentative way of understanding one’s object of study. Multiple validities, then, suggest that we should approach reality in less simplistically dichotomous ways, such as “true” or “false” and “right” or “wrong,” and instead to develop more complex terms. This does not mean that there are no rules for conducting research. It simply means that rather than one universal rule that applies everywhere, there are different rules, and we need to be aware how they make us relate to reality differently. There are three methodological approaches to uncovering multiple validities: hermeneutic/ dialogic validity, which evaluates research in terms of how truthfully it captures the lived worlds and experiences of the people and communities being studied; poststructuralist/ deconstructive validity, which evaluates research in terms of how well it manages to unravel social tropes and discourses that, over time, have come to pass for “truth;” and realist/ contextual validity, which refers to the capability of research to locate the phenomena it is studying within the wider social, political, and even global, context. My talk this evening will be methodologically reliant upon the latter two frameworks insomuch as I will examine how advertisements communicate tropes and discourses that have come to pass as “truth” for racialized women in the U.S. and also how these tropes and discourses can be best theorized by examining the wider sociopolitical contexts in which the advertisements are situated. 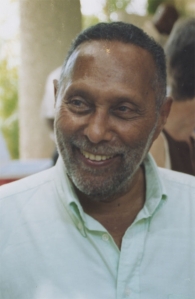 Regarding critical media studies, James Lull argues, “The most potent effect of mass media is how they subtly influence their audiences to perceive social roles and routine personal activities.” This happens because media functions as a hegemony, which Lull defines as a “power or dominance that one social group holds over others.” Along these lines, Antonio Gramsci argues that hegemony and mass media “are tools that ruling elites use to perpetuate their power, wealth, and status by popularizing their own philosophy, culture, and morality.” More specifically, Sut Jhally argues that “advertising thus does not work by creating values and attitudes out of nothing but by drawing upon and rechanneling concerns that target audiences already shares.” Stuart Hall would, of course, connect this to racism and white supremacy. He writes, “Every word and image of such programmes are impregnated with unconscious racism, because they are all predicated on the unstated and unrecognized assumption that blacks are the source of the problem.” Hall defines this as “inferential (or unconscious) racism,” which leads to “apparently naturalized representations of events and situations relating to race, whether factual or fictional, which have racist premises and propositions inscribed in them as a set of unquestioned assumptions.” Audiences typically only respond viscerally to “overt racism,” which Hall defines as “occasions when open and favorable courage is given to arguments, positions and spokespersons who are in the business of elaborating a racist policy.”

Scholars writing within the tradition of feminist theory have advanced these arguments by taking an intersectional approach that considers race, socioeconomic status, gender, sexuality, and other social markers when examining mediated constructions. In “Eating the Other: Desire and Resistance,” bell hooks explains that in “mass culture, imperialist nostalgia takes the form of re-enacting and re-ritualizing in different ways the imperialist, colonizing journey as narrative fantasy of power and desire, of seduction by the Other.” Further, she explains that white males “claim the body of the colored Other instrumentally, as unexplored terrain, a symbolic frontier that will be fertile ground for their reconstruction of the [white, Western, heteropatriarchal] masculine norm, for asserting themselves as transgressive, desiring subjects. They call upon the Other to be both witness and participant in this transformation.” Marian Sciachitano explains that these “heteropatriarchal and imperialist politics of domination that desires and demands the construction of ‘fantasy islands,’ ‘new planets,’ and ‘playgrounds’ where Black and ‘Third World’ women are positioned as interchangeable, exotic, sexual commodity-objects.” It is this practice of commodifying the “Other’s” interchangeable, essentialized difference that, as hooks claims “promotes paradigms of consumption wherein whatever difference the Other inhabits is eradicated, via exchange, by a consumer cannibalism that not only displaces the Other but denies significance of that Other’s history through a process of decontextualization.” I also want to point out here that throughout this talk, I won’t describe these constructions as “stereotypes,” which refers to “too-simple and therefore distorted images of a group, generalizations, usually exaggerated or oversimplified and often offensive, that are used to describe or distinguish a group.” Instead, I will use Patricia Hill Collins’ “controlling images” theory, which I think more effectively conveys the implications of stereotypes for subjugated people and communities.

Click here to view the PowerPoint presentation.
Click here to listen to the audio recording of the discussion.